The following is an explanation of the Tension Building Explosion Model and The Cycle of Violence.

In 1979, Lenore Walker, author of The Battered Woman, developed the Tension Building/Explosion Model of the Cycle of Violence. Walker based her cycle on research conducted on 120 battered women. The Tension Building/Explosion cycle has been used since that time in countless books and articles to indicate what is happening in the lives of abused women.

During the tension building phase the abuser becomes more temperamental and critical of the victim. As the tension escalates, the victim feels as if she is "walking on eggshells." The victim may try to placate the abuser to prevent the abuse.

The abuser verbally or physically attacks the victim. This is much more intense than during the tension building phase and may increase in intensity with each explosive phase.

The batterer expresses remorse over his behavior and promises to change. The batterer is charming and may offer gifts such as flowers, jewelry, perfume and candy.

By 1983, women working in the Anti-violence Movement realized the Tension Building /Explosion model was flawed. Abusers do not harm their intimate partners because of tension and stress. As humans, each of us feels stress and tension in our lives and yet, we do not make the choice to abuse someone else. If it were a matter of tension the abusive person would be unable to control his behavior and would batter whoever was causing the stress (i.e., the boss who yells at him or police officers who pull him over, etc.) Also abusers would not be able to control where their punches landed. Many abusers "target punch" their partners - specifically targeting areas where the bruises and marks are less likely to be seen - the neck, back, upper torso and legs.

The Tension Building/Explosion Model may also be used to blame the victim for the abuse. If she would just keep the children quieter or keep the house clean there would be less stress in the household. It becomes the victim's responsibility to keep the abuse from happening. Due to our socialization process, it is common for women in our society to feel responsible for making a relationship "work" and the Tension Building/Explosion Model of the Cycle of Violence only feeds into those stereotypes.

Since 1983,  advocates for women who are abused have found the cycle presented in the next topic to be a more accurate representation of what occurs when someone chooses to be violent.

Domestic violence may seem unpredictable, simply an outburst related just to the moment and to the circumstances in the lives of the people involved. In fact, however, domestic violence follows a typical pattern no matter when it occurs or who is involved. The pattern, or cycle, repeats; each time the level of his violence may increase. At every stage in the cycle, the abuser is fully in control of himself and is working to control and further isolate his victim.

Understanding the cycle of violence and the thinking of the abuser helps survivors recognize they truly are not to blame for the violence they have suffered and that the abuser is the one responsible.

Six distinct stages make up the cycle of violence: the set-up, the abuse, the abuser's feelings of "guilt" and his fear of reprisal, his rationalization, his shift to non-abusive and charming behavior, and his fantasies and plans for the next time he will abuse.

Abuse can be emotional, physical, sexual, psychological, economic, and social (please refer to the Patterns of Abuse).

A non-abusive person experiences guilt very differently than an abusive person. A non-abusive person feels guilty about how they have impacted the life of the person they harmed (victim-directed guilt). An abuser experiences self-directed guilt. He does not feel guilty or sorry for hurting his victim. He may apologize for his behavior, but his apology is designed so that he will not face consequences or be held accountable. The goal of the guilt stage is to reassure himself that he will not be caught or face consequences.

The abuser makes excuses and blames the victim for his behavior. Common excuses usually revolve around the abuser being intoxicated or abused as a child.  However, alcohol use and being abused as a child does not cause the abuser to be violent. Common victim blaming statements usually focus on the victim's behavior. For example, "If you had the house cleaned, I wouldn't have had to hit you," or, "If you had cooked dinner on time, I wouldn't have had to hit you." The goal of this stage is to abdicate responsibility for his behavior.

During this stage, the abuser may use different tactics to achieve his goal to regain power over the victim.  The abuser may act as though nothing happened - everything is normal. This can be crazy making for victims, as they do not understand how he could pretend nothing happened.

Another tactic an abuser may use after he has chosen to be violent is to become the thoughtful, charming, loyal, and kind person with whom the victim fell in love.  He may take her out to dinner, buy her flowers and convince her he will change. This can be a huge incentive for women to stay or return to the abuser because they believe that this time he really will change. (See the section, Is He Really Going to Change? for more information)

Abuse is planned.  In the initial stages, an abuser fantasizes or has a mental picture of the next time he will abuse the victim. During the fantasy and planning stage, the abuser is the actor, producer, director and the star.

The abuser experiences his power from activating the fantasy. The planning phase details more specifically what the abuser will need to have and to do in order to abuse his partner.

Abusers may spend minutes, hours or days fantasizing about what the victim has done “wrong” and how he is going to make her “pay”. Most often he will fantasize she is having an affair.  Most abused women do not have the time, energy, or interest in having an affair.  However, it is the most common accusation, because she can never prove she is not having an affair.

This is when the abuser puts his plan into action. He sets the victim up.

Here is an example of the cycle of violence through all its phases.

A man abuses his partner.

After he hits her, he experiences self-directed guilt. He says, "I'm sorry for hurting you."

What he does not say is, "Because I might get caught."

He then rationalizes his behavior by saying that his partner is having an affair with someone. He tells her "If you weren't such a worthless whore I wouldn't have to hit you." He then acts contrite, reassuring her that he will not hurt her again.

He then fantasizes and reflects on past abuse and how he will hurt her again. He plans on telling her to go to the store to get some groceries. What he withholds from her is that she has a certain amount of time to do the shopping. When she is held up in traffic and is a few minutes late, he feels completely justified in assaulting her because "you're having an affair with the store clerk." He has just set her up. 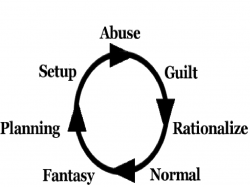